Does Your Dog Bark Too Much? 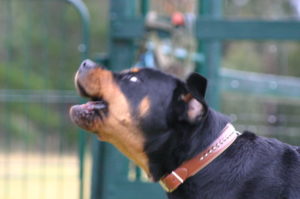 Statistics by the North American Animal League show that 10% of dogs adopted from U.S. shelters are returned because of behavior problems. And 41% of those involve excessive barking.

Asking a dog not to bark is as unreasonable as asking a baby not to cry. But incessant barking by a dog is a problem. At Bark Busters Dog Training Miami, we get to the root of why your dog is barking so we can show you how to fix the behavior. There is no need to rehome a dog because of barking because it is a problem we can help you to overcome. It is one of the most frequent behaviors I am called to help with.

Nuisance/Reactivity
When your dog barks at everything outside, believe it or not it is stressful for your dog. He thinks his job is to protect you, when in fact it is your job to protect him. He wants you to establish yourself as the leader of the pack, or else he feels he must be on patrol. Once you let your dog know that you are in charge, he no longer has to sound the alarm for every movement he hears.

Most domesticated dogs are not bred to be the “alpha dog”. The average dog is poorly suited to leading because we have bred them to be more complacent. Alpha dogs can be difficult pets as they are aloof, don’t care too much about affection, can be aggressive and prefer to lead versus listen. When an alpha dog senses a threat, he remains calm. However, when your dog senses a threat he probably starts barking and jumping. This is because he is not a natural leader but is filling it in the best way he knows how.

If your dog barks all the time, it is time for you to step in and fill the role of pack leader. Through a series of exercises, we will let your dog know that “you got this.” He will be much more relaxed and calm.

Boredom/Separation Anxiety
One of my clients had a dog Felicia who used to bark endlessly while his owner was at work. She was about to be slapped with an eviction notice. After meeting Felicia, I realized she was bored while her owner was away. I suggested that he pet parent take her for a long walk every morning and leave her with some interactive toys. I also suggested getting a dog walker who came in mid-day to exercise the dog. Problem solved.

Believe it or not, most cases of separation anxiety are NOT caused by the fact that your dog misses you. Instead, you are out of their sight so he is unable to protect you.

Associative Barking
Another client adopted a dog who was scared to death of men. Every time her husband got within the dog’s sight, the dog would start barking and growling. Maybe the dog was abused by a man or had a bad experience with a man. Either way, we did a series of re-association exercises where we ensured the dog had a pleasant experience when the husband entered the room.

Fear-Based
If you are out on a walk and your dog sees another dog or person and starts to bark, he is probably reacting out of fear and not out of aggression. This type of barking can seem pretty aggressive but in almost every instance, it’s your dog trying to put on a show because he is afraid for himself and/or for you. Just as with reactivity based barking, the solution is to help your dog understand that the safest place in the world is by your side. Remember that dogs take their cues from you. If you are calm, they are calm.

Regardless of why your dog is barking, there is a solution and Bark Busters Miami can help. Give me – Luis Escobar a call or email me and find out how easy it is to have a quiet and peaceful home. Any age, any breed, any issue, guaranteed! Want to learn more about dog barking? Read on!