Is Your Dog Color Blind? 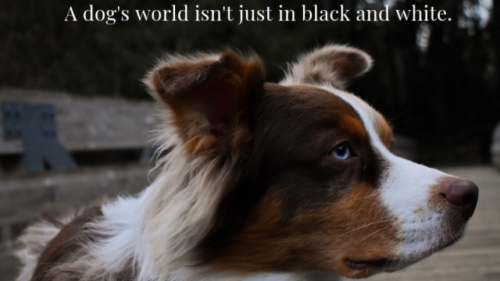 It had long been a debate whether dogs can see color, and if so, what colors. It has often been a misconception that dogs are color blind, meaning they only see shades of grey. This is incorrect! The right answer is that dogs can see color, just not as rich nor the variety seen by humans.

Both dogs and humans have “cones” that respond to color. Since dogs have less cones than humans, it makes sense their colors are not as vibrant. The real issue is that dogs only have two cones whereas humans have three. Human cones are able to detect 3 different colors: blue, red, and green. Dog cones can only detect 2 colors, and no one is exactly certain which colors they are able to detect

Jay Neitz at the University of California in Santa Barbara did an experiment of dogs and colors using light panels.

As reported in Psychology Today:
“Instead of seeing the rainbow as violet, blue, blue-green, green, yellow, orange and red, dogs would see it as dark blue, light blue, gray, light yellow, darker yellow (sort of brown), and very dark gray. In other words, dogs see the colors of the world as basically yellow, blue and gray. They see the colors green, yellow and orange as yellowish, and they see violet and blue as blue. Blue-green is seen as a gray.”

Dog color vision is quite similar to a person who has red-green color blindness. Men are more likely to be color blind because they only have one X chromosome, so if it’s defective they can’t see red-green. Women have an extra X, so they have to have two defective chromosomes, one from each parent, to have the defect in vision

However, dogs have a leg up on humans when it comes to certain visual abilities.  Dogs are much more sensitive to motion at a distance — anywhere from 10 to 20 times more sensitive than humans. Their vision is also well-suited to hunting during dawn and dusk.

The funny thing is that many of us gets our dogs toys that are red or yellow, colors they can’t even see! This is why dogs love chasing a bright yellow tennis ball, because it is a color they can actually see.

Dogs and Their Eyes
Because of their eyeball placement, dogs have wider peripheral vision than we do. Dogs can see an impressive 250 degrees, whereas humans can only see 190 degrees. Whereas humans hope to have 20/20 vision, dog’s vision is approximately 20/75.

However, don’t feel sorry for dogs because of their eyesight limitations. What they lack in visual ability, they make up for in sense of smell. Their noses have been estimated to be up to 100 million times more sensitive than yours!

If you have ANY questions, contact your local dog trainer — Luis Escobar — at Bark Busters Miami.