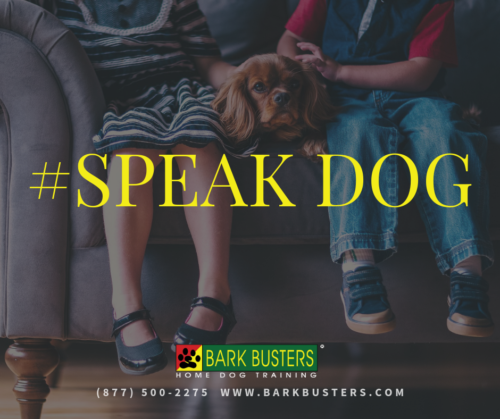 When puppies are first born, they do not communicate with their Mom and littermates in English! Instead, they use body language and guttural sounds, such as barks, growls and postures. This is the secret sauce behind the Bark Busters Miami training system – we teach you how to speak dog!

Dogs who first meet do this as well. When they first meet, dogs use their body language to assess each other. Signs of assertiveness and confidence are a stiff body, head and ears up, hackles up and tail up. Signs of respect are the lowering of the body, the head, the ears and the tail.

Because dogs instinctively know and understand these body signals, it only makes sense that we humans would be able to communicate with them better if we can learn how to imitate the ways in which they communicate with each other.

That’s why experts say behavioral training is so important-and that lasting training isn’t about treats and physical punishment. It’s about understanding the way your dog thinks and communicates in a way that establishes the owner as the calm, consistent leader.

Dogs are pack animals. They have a specific way of interacting, which includes an instinctual manner of communication. Learning how to communicate effectively with your dog in a language he understands is the first step toward establishing leadership and control.

So, while Rover might learn the meaning of a few words, they will learn more quickly if we communicate using their language. Once we communicate clearly with them by using a language they already know, then we can start to teach them some of our own language.

Learning canine is not hard. It takes practice, however, because it is not instinctive for us. If you watch Rover talk to his friends and then to strangers, you will begin to see certain patterns of communication. We learn how they meet each other, how they greet each other, and how they call one another to follow. We see how they let each other know when they are uncomfortable with someone getting into their space.

Using a dog’s own language to communicate with him is the quickest, most effective way of getting through to him. Thus, when we are trying to train our dogs, it just makes sense to teach them in a language they already understand.

Bark Busters Miami can help you change your dog’s behavior in minutes once you learn to speak dog! Contact Luis Escobar BEFORE you give up on your dog!